We demand that Metrolinx NOT purchase diesel trains for the air-rail link to Pearson Airport. Build it once, build it right, GO Electric NOW!

VOLUNTEER at info@cleantrain.ca
Help deliver flyers, share information and get other involved in your area. 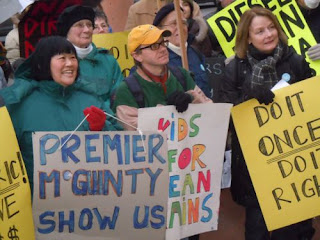 PREMIER McGUINTY: DO NOT BUY DIESELS FOR THE AIR RAIL LINK

On Wednesday January 26th the Clean Train Coalition (CTC) held a demonstration in outside the Metrolinx board meeting at the Central YMCA on 20 Grosvenor Street. The rally called on Metrolinx not to proceed with the purchase of diesel trains for the air-rail link (ARL) to Pearson airport. The group then marched up Yonge St to the offices of the Ontario Liberal Party at 10 St. Mary Street. Here, Premier McGuinty was called upon to direct Metrolinx to purchase electric trains.

Notice was served that clean trains will be a major issue in the October provincial election if we are ignored. Thanks, all for helping to get the message through!

The Clean Train Coalition has successfully advanced the case for clean electric trains as the way of the future of sustainable mass transit. Metrolinx Board gave its support to the staff recommendations based on the electrification study to make the ARL the priority project for electrification, and to electrify all of Georgetown and Lakeshore routes.

However, this approval does not stop them from ordering diesel trains which they maintain are still needed. Metrolinx still plans to buy diesels for the air rail link, with the endorsement of the Provincial government. Metrolinx staff state it will take at least 7 years to complete the ARL and 23 years to finish the other two lines.

Clean Train Coalition strongly believes that electrifying the new transit service between Union Station and the Airport can be expedited. This will mean that the option for purchasing diesel trains, negotiated by Metrolinx before completing the Electrification Study, will not be necessary. Suitable electric vehicles can be made in Ontario, and the Japanese manufacturer that Metrolinx prefers makes the same vehicle in an electric version.

The recently released Metrolinx electrification study validates the benefits of electrifying. According to Metrolinx, the ARL will eventually be electrified. The CTC demands that an expert peer review of the proposed timeline takes place to speed up implementation. Costly plans to purchase ‘convertible’ diesels should be dropped in favour of using electric trains from the start.

Build it once, build it right, GO Electric Now!

PLEASE TELL YOUR FRIENDS AND NEIGHBOURS. Register at info@cleantrain.ca to help connect your local area. Form your own local group and raise awareness. Delivering flyers locally ensures people in your community get informed and encourages them to take action.

The Clean Train Coalition is a non-partisan volunteer group that represents the communities along the rail corridor. We believe that a healthy environment and vibrant neighbourhoods depend on smart investment in public transit infrastructure. Build it once, build it right!

Help get the word out - get your neighbours to sign up to www.cleantrain.ca